Allied Electric provides electrical construction services in both the commercial and industrial industries as well as within the health care, educational and institutional markets.

When you hear the word hopscotch, you may recall a hopping game played by children, particularly those from an earlier generation. Lately, some of those former children – now in the latter stages of life – played another version of that childhood game. During construction work at The Terraces at Maple Creek, residents of the retirement village had to hop around a bit, moving temporarily to vacant units while contractors made renovations to their living quarters. Dick Hansma, Allied Electric’s project manager for the Maple Creek assignment, recalls having to “hopscotch tenants” during the logistically complex work. “We did have to keep all facilities on line,” he recalls, which required a “very, very thoughtful, well-planned, phased construction involving all the contractors and the staff.”

Now, settled comfortably back in their respective places, residents at The Terraces are enjoying the clubroom, craft center, café and greenhouse, and are making good use of the health and fitness rooms, library and beauty salon. The construction work has increased to 173 the number of independent living units (each equipped with a personal emergency response system), and included conversion of an old chapel into a contemporary cafeteria featuring vaulted ceiling and exposed beams. The facility now has a new chapel, as well as a new kitchen addition, administrative offices, maintenance building and carports. Allied’s participation included the removal of existing electrical services and emergency generators and replacing them with that which is newer and larger. “They have a great campus now, absolutely,” notes Hansma. 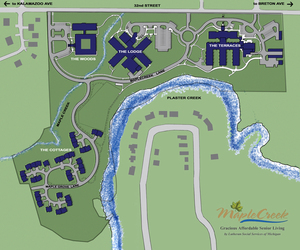 The Health ScienceCenter was built to consolidate its medical programs to one location on itsmain campus. The 2 story, 35,000 sq. ft. center nearly doubles the availab...