Michigan State University installed three new electronic signs at Spartan Stadium just prior to the 2012 football season.  The signs, rated as the fifth largest in the country, and the related support structure was huge, heavy, and high.  This created the problem of supporting the signs from sinking and from blowing over in strong winds because of the huge wind resistance factors.  Helical piers were installed in a highly designed pattern to be able to absorb the wind forces from all directions.  Several piers were field tested to assure performance.  They passed the tests flawlessly and are now fully loaded and in full operation, touting Spartan Football. 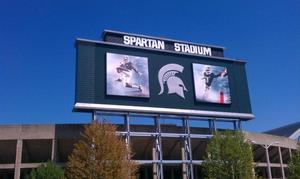 The stimulus bill that passed Congress in 2009 provided funding for many government structures, one of those structures that received funding was a new airport traffic control tower and administration building for the Cherry Capital Airport in Traverse City, Michigan.  Kent Companies entered into the competitive bid process and was selected as the cast in place concrete subcontractor by The Christman Company, the awarded general contractor on the job.

Kent Companies’ scope of work for the tower included the three hundred fifty cubic yard basemat with foundation walls, the slab on grade, and slab on metal decks and precast at the top of the tower.  The scope of work for the administrative building included the foundations, the slab on grade, and the concrete on the metal deck for the roof.  Along with the buildings, there were also numerous sitework concrete items that were poured.

The pictures for this job tell only part of the story.  While this may look like just another construction site, what the pictures don’t tell are the high tolerances required for a tower structure that rises over one hundred and fifty feet in the air.  The basemat foundation walls had numerous sized vertical rebar in it, with the allowable tolerances being an 1/8” in either direction.  A template was provided, and was installed with double and triple checking of the reference points to assure it was properly placed.  Along with the challenges in meeting the tight tolerances, Mother Nature seemed bent on slowing the progress with regular lake effect snow events that required a full day just to dig out from.  It all paid off when the tower foundations were complete and the precast structure began to rise out of the ground.

Throughout the project, many different challenges arose either due to conditions in the field or in meeting the requirements of the FAA’s paperwork.  Both the field staff and the office staff at Kent Companies partnered together to work through whatever challenges arose to get the job done and to meet the customer’s expectations for quality and schedule, demonstrating the company slogan, “Make It Happen.” 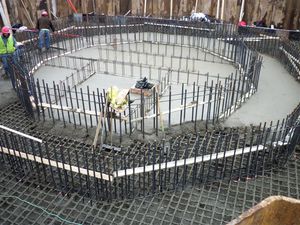 The shore well station for Benton Charter Township looks like a small building from the road, but the small size of the building is much like the proverbial tip of the iceberg.  Underneath the building lies a forty foot deep, twenty foot diameter well with an inlet pipe at the bottom that allows Lake Michigan water to gravity feed into the bottom of the well, where it is pumped out of the station to a treatment facility nearby.

Kent Companies won the competitive bid to perform the concrete scope of work on Contract D of the Benton Charter Township Raw Water Pump Station as a subcontractor for Erhardt Construction.  From bid day on, it was known that the shore well itself would be a complicated endeavor.  The construction site was on a bluff overlooking Lake Michigan, so digging a hole forty feet in the ground and starting at the bottom was not an option.  Team Elmers drove steel sheeting into the ground to act as the outside form of the shore well. Through much discussion and modeling, it was decided to begin construction from the top of the shore well in eight foot sections.  After each section was poured, the next eight feet of dirt would be excavated, the exposed sheeting power washed, anchor points welded, inside forms installed, and then concrete poured.  One challenge in all of this was how to get the concrete into each new pour with the previous pour already in place above it.  The solution was to create pour pockets in the bottom of each wall section so that once the concrete was poured and the forms removed, an opening existed to allow concrete to be pumped into the pour below it.  As the pictures indicate, this was a challenging task.  The job was further complicated by winter conditions.  Once the shore well wall was in place, the cast in place lid was next.  This was accomplished by setting up shoring at the bottom of the well and building it up to create the deck to pour the lid on.  The openings in the deck had to be precise to allow the various pumps and traveling filter screen to move through the openings without issue.

The well house structure itself was another challenge.  The construction of the well house was similar to that of the shore well.  Steel sheeting was driven into the hillside and the dirt excavated away.  Once the sheeting was cleaned, hundreds of anchor points were welded to the sheeting and formwork was erected and held in place with ties screwed into the anchor points.   Once again, the planning and execution paid off, and the complicated one-sided wall construction went off without a hitch.

As the job progressed, Kent Companies was asked to offer assistance in finding a solution for filling in the area between the water intake pipe and its boring casing that ran out into the lake.  Through consultation with the experienced concrete pump operators at Kent Companies, it was decided to weld a plate over the area at the end of the pipe and the casing and put a valve on it to allow flowable fill to be pumped through the valve.  This same thing was done at the other end of the pipe to allow the air to escape.  Once the weld plates and valves were all complete, the flowable fill was pumped into one side, and the other valve remained open until the material came out.  When the flowable fill came out the far side, the pumping operations were ceased and both valves were closed.  A job well planned and executed.

The challenges encountered at the Benton Charter Raw Water Pump Station allowed Kent Companies to showcase the talents and inventiveness of its employees, along with diligence and dedication to the cause that Kent Companies has been recognized throughout the industry for. 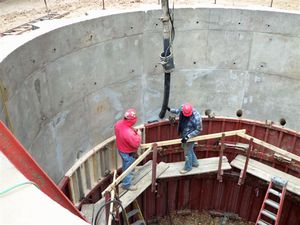