Houseman Construction Company was established in 1998 based on a few good ideas and a clear vision for putting them into action. The goal was to create a company which, over time, would establish an outstanding reputation, develop positive relationships

In February 2003, Houseman Construction Company was hired to build Lake Michigan College’s new 42,000-square-foot campus in South Haven, Michigan.  Designed to be the focal point in the South Haven Community, the campus features an outdoor plaza and an indoor commons area that serve as gathering spots for members of the student body and community members alike.

Innovations include wireless computer areas that give students the flexibility to learn and interact with other students and their instructors, without being tethered to a stationary computer.  Every classroom is equipped for multimedia instruction.  This allows instructors to reach out to more students with a wider range of learning styles.   Two science labs, an art studio, 12 general classrooms, a two-way interactive classroom, a daycare center, a 24-station computing lab, and a 17-station graphic design computing studio are just some of the features included in this “state of the art” $7.8 million facility.

Houseman Construction began construction in February, and the building was opened for registration on August 19, just 7 ½ months later. 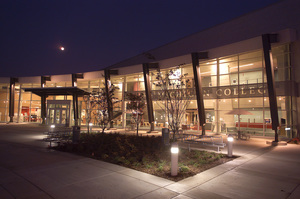