Erhardt's project at the City of Wyoming's Clean Water Plant involved a major $35.6 million expansion to the wastewater treatment facility, as well as rehabilitation of some of the existing facilities and equipment. The project included:

Three new aeration basins, each holding a total of 3.5 million gallons of effluent water. Adjacent to the basins, a blower building and various pipe galleries were constructed.

Decommission and demolition of the city’s old trickling filter system.

Groundwater was a major obstacle due to the vast size of the project and the water level being just below grade. It was overcome with a team of wells to draw down the groundwater level, and the use of a bentonite slurry wall keyed into the clay layers below grade. Another challenge was integrating the new facilities into the fully functioning wastewater treatment plant without affecting the operation. Various system shut downs, effluent water bypasses, and multiple tie-ins were orchestrated by Erhardt Construction and our subcontractors.

Between all of the structures, a total of 25,000 cubic yards of concrete, miles of pipe, conduit, and wire were installed. 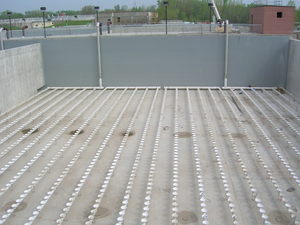 Aquinas College students returned to campus to find a new library that will serve as a gathering place for students, as well as a campus destination.  The new Grace Hauenstein Library includes 20 public access computers, 6 group study rooms, a digital editing suite, separate circulation and media checkout desks, open media stacks, and an archives research room with special collections.  The facility has wireless technology as well as adequate parking.  The library itself is very aesthetic, with views of the surrounding trees and campus.  It is designed for U.S. Green Building Council LEEDTM certification.  The facility highlights several sustainable features such as natural daylight, low-emitting VOC materials, and a photovoltaic system generating about five percent of the building's power. 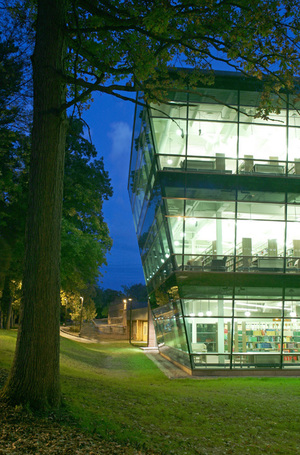 The Van Andel Institute is dedicated to conducting biomedical research, with a focus on cancer and Parkinson's disease, and with an emphasis on translating scientific research results into clinical applications.  The six-story, 165,000-square foot facility features massive concrete towers, a large column free lobby, and cascading glass roofs.  It houses laboratories and support areas for 100 researchers, administrative offices and a 350-seat auditorium. 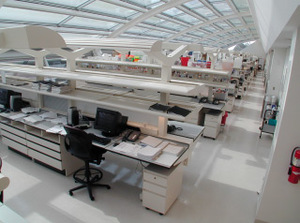 Breton Ridge in the Woods