For 40 years, Prein&Newhof has been meeting infrastructure needs for township, municipal, and private clients across West Michigan. We offer a wide range of engineering, environmental consulting, surveying, GIS, and laboratory services.

The North Kent Sewer Authority (NKSA) serves various communities, primarily the City of Rockford and the townships of Alpine, Cannon, Courtland, and Plainfield. These communities formerly relied on the City of Grand Rapids Plant for their sewage treatment.

In 1999, the Grand Rapids chose to increase treatment rates. The leaders of NKSA retained Prein&Newhof to study the feasibility of building and operating their own wastewater treatment facility.

The study resulted in a favorable conclusion based upon various factors: the NKSA’s ability to obtain a discharge permit; the availability of sufficient land; and the possibility for land application of solids. The NKSA elected to proceed and construct the new treatment facility in the best interest of its communities. A site was chosen for the plant north the City of Grand Rapids.

The NKSA then retained Prein&Newhof to investigate the use of special technology at the new plant. After conducting tours of membrane bioreactor (MBR) facilities and meeting with MBR manufacturer Zenon, P&N proposed implementing a MBR as the treatment method.  This method was chosen because it provides a very high degree of treatment for the wastewater, which is discharged into the Grand River upstream of the Grand Rapids Metropolitan area.

Prein&Newhof oversaw design and construction for facility, which is designed to service 8 million gallons per day. It is the largest plant of its kind in Michigan.

After 10 years of planning, design, and construction, the PARCC Side Clean Water Plant began receiving flow from its member communities in December of 2008. The plant processes, on average, about 4,000,000 gallons of wastewater every day. The effluent meets stable effluent requirements and has no negative impact on the river. In fact, the effluent is cleaner than the Grand River. 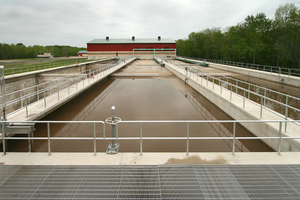 In 2003, Prein&Newhof was selected as part of the design team for the Helen DeVos Children’s Hospital at Spectrum Health in downtown Grand Rapids.
The project will include demolition of an existing 3-story parking facility and construction of an 11-story hospital tower with both an underground tunnel and an overhead walkway connecting across Michigan Street to the new Lemmen-Holton Cancer Pavilion.
The site has a zero setback distance from the rights-of-way for the building walls, and the site changes 30 feet in elevation from the main entrance on Michigan Street to the emergency entrance on Bostwick Avenue.
The project included a redesign of Bostwick Avenue, as well as a temporary earth retention system to support the 40 feet of exposed earth during excavation activities.
The project is scheduled to be completed in 2010. 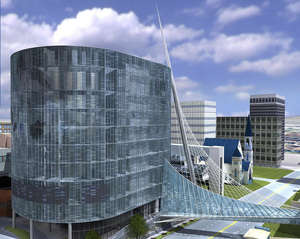 The project also involved geometric and safety modifications to West Fulton Street (M-45), which was widened from a 4-lane, two-way street to a 4-lane boulevard. These changes complement the project’s architectural style and address the safety needs of students walking to campus from nearby parking lots and a new residence hall across Fulton Street from the main campus.
Late in the project, a new 36-inch watermain was laid under Fulton Street where it intersects US 131, the project’s eastern boundary. This new watermain tied into an existing 24-inch watermain. This portion of the project involved intense scheduling and coordination with the Michigan Department of Transportation, the City of Grand Rapids, Ameritech, Michigan Consolidated Gas Company, and Consumers Energy.

Challenges on this project included an active CSX Railroad line along the western boundary of GVSU’s site, which complicated design and construction logistics; and a 5% grade at the campus entrance, which necessitated careful thought in order to address the Americans with Disabilities Act requirements for walkways.

With increased need for parking at its downtown Grand Rapids campus, Grand Valley State University turned to Prein&Newhof to design two parking lots. The total surface area of these lots was 4.5 acres. GVSU and the Prein&Newhof project team decided to manage the stormwater and protect the Grand River by routing surface drainage into an innovative Vortechnics stormwater treatment unit. The water is then discharged to the nearby Grand River.

Design challenges included the discovery of contaminated soil on both sites prior to construction, requiring that it be excavated and hauled away to an approved landfill. 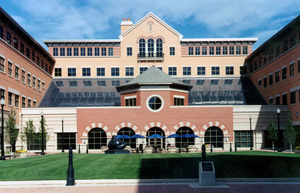